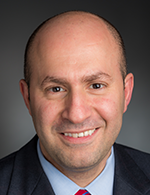 Dr. Choueiri is currently the Director of the Lank Center for Genitourinary Oncology at Dana-Farber Cancer Institute (DFCI), the Co-Leader of the Kidney Cancer Program at Dana-Farber/Harvard Cancer Center, and the Kohlberg Chair and Professor of Medicine at Harvard Medical School. He received the George Canellos Award for Excellence in Clinical Investigation from DFCI in 2013, the Eugene Schonfeld Award from the Kidney Cancer Association in 2016 and is a 2021 Giants of Cancer Care inductee.

Dr Choueiri initially trained at the Cleveland Clinic in Internal Medicine and Medical Oncology where he joined the laboratory of Ram Ganapathi, exploring biomarkers of response to anti-angiogenics in renal cell carcinoma (RCC). At DFCI, he continued to explore the molecular mechanisms behind RCC tumor response and resistance to targeted therapy and immune checkpoint blockers using multi-OMICs approaches. His work in rare forms of kidney neoplasms led to the discovery of BRAF gene mutations in metanephric adenoma of the kidney; shed light on the biology of response to MET inhibitors in papillary RCC, resulting in the first biomarker-based prospective trial in advanced RCC; and characterized the molecular and immune landscape of sarcomatoid and translocation RCCs, both aggressive forms of kidney cancers. He is the co-founder of the International Metastatic Database Consortium.