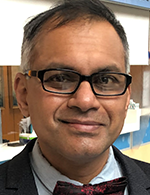 Work from my lab has deconvoluted the elements of the gut-lung axis in developmental immunology and established several paradigms in how we currently understand protective immune cells populate and become activated in the lung. We first showed that commensal intestinal bacteria are essential in priming neonatal protective immune response [Nature Medicine (PMID: 24747744). In the absence of these priming signals, neonatal immune cells cannot mount a robust response against the pathogens causing infection susceptibility in this vulnerable developmental window. A follow-up study [Science Translational Medicine (PMID: 28179507) (Recommended by F1000)] described the molecular mechanism by which commensal enteric bacteria prime systemic and extra-intestinal mucosal immunity. This observation was especially relevant as chronic respiratory diseases of childhood, such as asthma, are common in infants delivered by cesarean sections or those with a history of antibiotic use in early life.

Recent work also revealed the importance and developmental origins for innate lymphoid cells, a group of sentinel immune cells, critical for lung mucosal defense against bacterial pneumonia in the neonatal period when T-cell mediated immunity is weak [Immunity (PMID: 32075728) and Nature Communication (PIMD: 30604742)]. We showed that neonatal lung is the principal site of pulmonary type 3 innate lymphoid cell biogenesis and that these protective cells are derived from precursors that populate a spatially distinct niche, defined by fibroblasts in the developing lung alveoli. Together, they establish the scientific explanation for the paradoxical association between increased perinatal antibiotic use and neonatal pneumonia.

I am proud of my early achievements as a mentor, exemplified through the success of trainees in my lab receiving national recognition (Marshall Klaus Award, from American Academy of Pediatrics). In addition, I serve as a primary mentor for two early-stage faculty members in the Department of Pediatrics, one of whom is the recipient of a K-award. Finally, I am committed to developing early-stage faculty and graduate students and recently joined the NIH-funded Child Health Research Career Development Award (K12) program leadership as Associate Program Director.