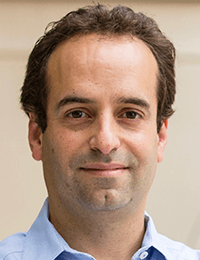 Dr. Joshua Mendell has made fundamental discoveries that have significantly advanced our understanding of the regulation and functions of mammalian microRNAs (miRNAs) and other noncoding RNAs, and have revealed critical roles for noncoding RNAs in the pathophysiology of cancer and other diseases. For example, his group demonstrated that miRNAs play a major role in cancer pathogenesis by functioning downstream of key oncogenes and tumor suppressors. Dr. Mendell has been at the forefront of elucidating miRNA functions in vivo and translating these findings into novel therapeutic approaches, most notably through the demonstration that systemic delivery of miRNAs potently suppresses tumorigenesis in mouse cancer models without toxicity. Dr. Mendell has also advanced our understanding of miRNA regulation, identifying novel mechanisms that control miRNA abundance, stability, and activity. Most recently, the Mendell laboratory has identified long noncoding RNAs that regulate cancer hallmarks, including their discovery of the first long noncoding RNA shown to be essential for the maintenance of genomic stability in mammalian cells.

Dr. Mendell has been recognized with several prestigious awards including the Allan C. Davis Medal for the Outstanding Young Scientist in the State of Maryland in 2007, the AACR Award for Outstanding Achievement in Cancer Research in 2010, an NCI Outstanding Investigator Award in 2015, the O’Donnell Award from the Academy of Medicine, Engineering, and Science of Texas in 2016, and the Paul Marks Prize for Cancer Research in 2019. Dr. Mendell was appointed as an HHMI Early Career Scientist in 2009 and an HHMI Investigator in 2015.