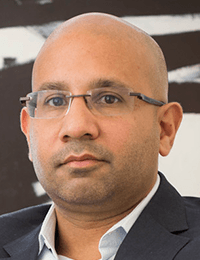 I am a cardiac electrophysiologist at Massachusetts General Hospital, the Director of the Resynchronization and Advanced Cardiac Therapeutics Program, and an Associate Professor of Medicine at Harvard Medical School. My laboratory focuses on cardiac electrical and mechanical remodeling and I have made significant contributions to this field in several areas: firstly, delineating novel signaling pathways important in heart remodeling; secondly, pioneering the development of the field of extracellular RNAs as functional biomarkers in cardiac remodeling; and thirdly, developing RNA therapies to target processes important for heart failure progression.

My work in the area of novel signaling pathways led to identifying the role of the serum and glucocorticoid regulated kinase-1 (SGK1) as a mediator of electrical and mechanical remodeling in the heart in response to stress. We subsequently developed the concept of inhibiting SGK1 to treat arrhythmic disorders. Continuing on this theme, work in my laboratory studied novel downstream effectors of SKG1 including DDiT4L, which appears to function as a novel regulator of autophagy and apoptosis in the heart with implications for treatment of cardiometabolic diseases.

We played a major role in the National Center for Advancing Translational Sciences efforts to systematically investigate extracellular RNAs as biomarkers and mediators of intercellular signaling. As part of this effort, I have spearheaded efforts to adopt RNA sequencing techniques for extracellular-RNAs, including co-chairing several committees and participating in collaborative efforts that led to a series of papers in Cell. Our work in this area has identified plasma microRNAs as novel functional prognostic biomarkers for cardiac remodeling that also serve as tools for discovery of novel heart failure-associated signaling networks. On-going work in the laboratory seeks to develop new techniques and tools to study the role of plasma ex-RNAs in the pathogenesis of heart failure and cardiometabolic diseases. More recently, we have leveraged our findings to develop highly specific RNA switch therapies that are turned on only in diseased cells of interest.

In addition to my research and clinical activities, I am dedicated to training the next generation of translational scientists and am most proud of the achievements of some of my mentees who have excelled in the academic and industry settings.