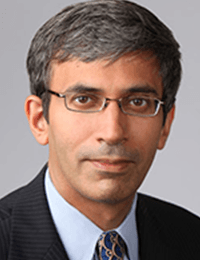 Dr. Arora is a clinical cardiac electrophysiologist and Professor of Medicine at Northwestern University’s Feinberg School of Medicine. He is also director of the Experimental Cardiac Electrophysiology program at Northwestern. Dr. Arora’s research is largely focused on obtaining an understanding of the molecular mechanisms of atrial fibrillation (AF). AF is the most common heart rhythm disorder and a major cause of stroke. Since current therapeutic approaches to AF are suboptimal, Dr. Arora’s longer term goal has been to develop new, mechanism-guided therapeutic approaches to AF.

Over the last several years, Dr. Arora’s laboratory has demonstrated an important role for the autonomic nervous system and oxidative injury in the genesis of AF. Dr. Arora has published several important papers that have contributed significantly to our understanding of how autonomic signaling creates a vulnerable substrate for AF. More recently, his laboratory has been working on how oxidative injury contributes to electrical remodeling (i.e. remodeling of ion channels) and structural remodeling (i.e. generation of fibrosis) in AF. Over the last decade, his laboratory has been working to develop new, gene therapy approaches to AF. Using these novel gene therapy approaches, Dr. Arora has shown a significant decrease in both electrical and structural remodeling in clinically relevant large animal models of AF.