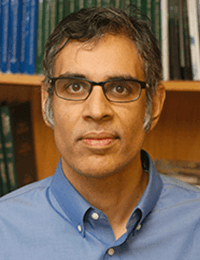 Dr. Nijhawan is a graduate of the University of Texas Southwestern Medical Scientist Training Program (MSTP). At UTSW, he completed his thesis work with Xiaodong Wang on the biochemical pathways of apoptosis. The defining event in the apoptosis pathway is the release of cytochrome c from the mitochondria to the cytosol. Dr. Nijhawan’s work provided insight into how cytochrome c is released from mitochondria as well as the mechanism by which cytochrome c activates the apoptotic pathway.

Following the completion of his MD and PhD degree at UTSW, Dr. Nijhawan completed a two year internal medicine residency at the Massachusetts General Hospital (MGH) and then a four year fellowship in medical oncology at the Dana-Farber Cancer Institute (DFCI). His fellowship included three years of research divided between the DFCI and the Broad Institute under the supervision of Bill Hahn. In Dr. Hahn's lab, Dr. Nijhawan characterized a novel class of cancer vulnerabilities defined by genetic loss, known as CYCLOPS genes.

In 2012, Dr. Nijhawan returned to UTSW to launch his own research program with a dual appointment in biochemistry and hematology/oncology. While at UTSW, he challenged the generally accepted paradigm for drug discovery which is to start with a well-defined drug target and then to use a variety of biochemical, structural, and pharmacological tools to develop new therapeutics. He has undertaken the opposite approach by starting with molecules that have well established anti-tumor effects and using forward genetics and classical biochemistry to elucidate their mechanism of action. As an independent investigator, he has pinpointed the molecular targets for three anti-cancer toxins. In each case, these discoveries have provided new strategies to treat cancer.