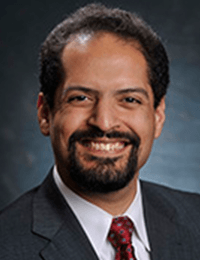 Dr. Gutierrez is the Hilda B. Anderson Endowed Chair in Nephrology and Professor of Medicine and Epidemiology at the University of Alabama at Birmingham. His group’s research efforts are concentrated in three major areas. First, he has made important contributions in delineating the relationships between disturbances in mineral metabolism and clinical outcomes, with a special interest in behavioral and environmental exposures that may modulate this pathways. Within this area of interest, he has primarily focused on the connections between disturbances in phosphorus metabolism and cardio- and cerebrovascular morbidity and mortality, including the emerging role of fibroblast growth factor 23 (FGF23). Second, he has helped to identify the reciprocal relationships between disturbances in mineral and iron metabolism and anemia in individuals with chronic kidney disease, with a particular focus on novel regulators of iron such as hepcidin. Third, he has examined the role of nutrition in the development and progression of metabolic complications related to kidney injury, focusing on the role of phosphorus and sodium-based food additives in the pathophysiology of inflammation, insulin resistance and endothelial dysfunction in individuals from across the spectrum of kidney function. A consistent thread weaving through Dr. Gutiérrez’s research is a focus on finding potentially modifiable risk factors for disparities in health outcomes, particularly kidney disease and stroke. His group has made original and important contributions to this field, and it continues to investigate these issues through a combination of epidemiological, patient-oriented and genetic approaches.