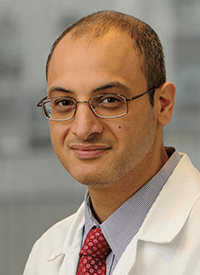 I am an Associate Member in the Human Oncology and Pathogenesis Program and an Attending Physician on the Leukemia Service in the Department of Medicine at Memorial Sloan Kettering Cancer Center (MSK). I also serve as co-director of the Hematology/Medical Oncology fellowship program at MSK and co-director of the Center for Hematologic Malignancies. My research focuses on understanding the functional implications of somatic mutations found in patients with hematopoietic malignancies with the hopes of improving our understanding of disease biology and developing novel therapies. Currently, we are centered on the role of mutations affecting the transcriptional regulation in leukemias. This includes mutations in epigenetic modifiers in leukemia pathogenesis as well as mutations in components of the RNA splicing factor machinery. We have generated substantial reagents to study the role of mutated spliceosomal factors in hematopoietic malignancies and solid tumors, including several murine models of mutations in the genes Srsf2, Sf3b1, and Zrsr2. We utilize these models to create novel murine models of myeloid malignancies for epigenomic, functional, and preclinical therapeutic studies. Finally, we are also interested in hematological malignancies driven by MAP kinase pathway alterations. Our research is supported by the NIH, National Cancer Institute, National Heart, Lung, and Blood Institutes, the Leukemia & Lymphoma Society, the Deptartment of Defense, the American Society of Hematology, and numerous additional philanthropic organizations. My work has been recognized by a 2017 ASCI Seldin~Smith Award and the 2016 Joanne Levy Memorial Award for Outstanding Achievement from the American Society of Hematology.