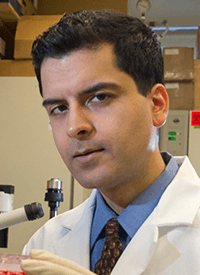 Dr. Jaffrey is the Greenberg-Starr Professor in the Department of Pharmacology at the Weill Cornell Medical College. He received an MD and PhD in 1999 from Johns Hopkins School of Medicine where he studied mechanisms of nitric oxide signaling with Dr. Solomon H. Snyder. After brief postdoctoral training with Dr. Snyder, Dr. Jaffrey started his own laboratory at Weill Cornell Medical College in 2001.

Dr. Jaffrey’s work has fundamentally advanced our understanding of RNA biology and gene regulation. In 2005, Dr. Jaffrey demonstrated, for the first time, that specific mRNAs are trafficked to axons and locally translated to mediate axon guidance. This led his laboratory and others to identify a large set of axonally localized RNAs whose translation orchestrates axon guidance and neural circuit formation. His lab has also developed genetically encoded fluorescent RNAs for imaging RNA localization and trafficking in live cells, including the Spinach-tagged RNAs, which can provide the same types of insights into RNA localization as GFP has provided for proteins. Most recently, he has helped to launch the field of “epitranscriptomics,” which relates to the diverse nucleotide modifications that impact the fate and function of mRNA and long noncoding RNAs in cells. Dr. Jaffrey’s transcriptome-wide mapping of N6-methyladenosine (m6A) in 2012 revealed that m6A is a pervasive modification in the transcriptome, thereby identifying this modification as a fundamentally novel form post-transcriptional mRNA regulation. Since this seminal study, Dr. Jaffrey mapped dimethyladenosine (m6Am) and established functions of m6A and m6Am as well as m6A and m6Am reader, writer, and eraser proteins. As a result of his early studies, epitranscriptomics is a rapidly developing area of molecular biology that is transforming our understanding of gene regulation in normal and disease states.