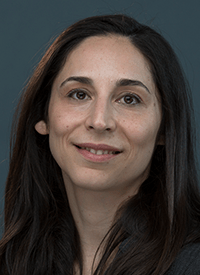 Anna Greka is an Associate Professor of Medicine at Harvard Medical School (HMS), a physician at Brigham and Women’s Hospital, and an Institute Member of the Broad Institute of MIT and Harvard. Seeking to lay the foundation for molecularly targeted therapies, Anna leads a program focused on dissecting fundamental mechanisms of disrupted cellular homeostasis in genetically-defined kidney, metabolic and degenerative diseases.

Drawing from her early work on TRP ion channels, and guided by genetic mutations associated with the Rac1 pathway in a subset of kidney diseases, Anna’s lab uncovered a Rac1-TRPC5 feed-forward loop linking TRPC5 channel activity to cellular injury. Based on these discoveries, TRPC5 inhibitors are showing promising results in clinical trials.

Motivated to dissect the mechanisms by which mutations in the MUC1 gene lead to disease, Anna and her team made a key discovery of a cargo receptor pathway that regulates the trafficking and degradation of misfolded secretory proteins. This general mechanism is operative in diverse cell types and tissues, such as kidney epithelial cells and retina photoreceptors, and remains an area of active investigation with implications for many proteinopathies.

Anna has been the recipient of several honors, including the Donald W. Seldin Young Investigator Award by the American Society of Nephrology and the American Heart Association, the Seldin-Smith Award for Pioneering Research from the American Society of Clinical Investigation (ASCI), and a Presidential Early Career Award for Scientists and Engineers (PECASE). She was also elected to the ASCI Council by her peers, and is a member of the National Academy of Medicine’s Emerging Leaders forum. Anna serves on the Harvard-MIT M.D.-Ph.D. Program Leadership Council.

Anna holds an A.B. in biology from Harvard College, an M.D. from the Harvard-MIT program in Health Sciences and Technology (HST) and a Ph.D. in neurobiology from HMS.