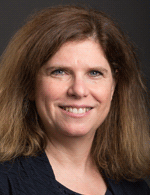 Dr. Harriet Kluger is a medical oncologist at Yale University, who sees patients with melanoma and renal cell carcinoma. Approximately half her time is spent conducting laboratory-based clinical and translational research in these diseases. Her particular focus is on predictive biomarkers and development of targeted therapies, both directly anti-neoplastic and immune activating. She conducts correlative predictive and prognostic biomarker studies using a variety of technologies, including exome sequencing, expression arrays, tissue microarrays, protein arrays and others. Her lab conducts pre-clinical targeted drug testing and knock-down studies, using both in vitro and in vivo systems.  She has been instrumental in generating clinically relevant models for these studies including large collections of organ specific human melanoma cultures and xenograft models, with a particular focus on models of brain metastasis. She has been involved in designing and conducting clinical trials, including early stage trials of immune checkpoint inhibitors, alone or in combination. She has conducted correlative biomarker studies for a number of trials, including large, multi-institutional studies conducted by the cooperative groups. She also conducts investigator-initiated studies, many for patients with brain metastases.