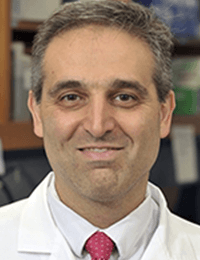 Dr. Hossein Ardehali received his BS degree in computer science from the University of Utah, and attended Vanderbilt Medical School from 1990-98, where he obtained the M.D. and Ph.D. degrees. He completed his medicine residency and cardiology fellowship training at the Johns Hopkins Hospital. He is currently a Professor of Medicine - Cardiology, and Pharmacology at Northwestern University, and is the Director of the Medical Scientist Training Program (MSTP or MD/PhD program) and the Center for Molecular Cardiology. He is the 2021-2022 President of the American Society for Clinical Investigation (ASCI), and serves on numerous American Heart Association (AHA) committees, including the AHA Council Operations Committee. He was inducted into the Association of American Physicians (AAP) in 2018. He has received several awards, including the AHA BCVS Young Investigator Award, the Jeremiah Stamler Distinguished Young Investigator Award, and the Schweppe Foundation Award. His research focuses on the role of mitochondria and metabolism in cardiovascular disease, with a focus on the role of mitochondrial iron in this process. His lab has shown that a disruption in the mitochondrial iron homeostasis leads to cardiomyopathy and that reducing mitochondrial iron can protect against doxorubicin-induced cardiomyopathy. He has also identified a novel “iron conservation” pathway that is activated to protect mammalian cells against injury from iron deficiency. Finally, his lab has also shown that hexokinase II binding to the mitochondria is critical for determination of the fate of glucose metabolism, and that an AMPK-related protein called SNRK improves mitochondrial efficiency through enhanced coupling.