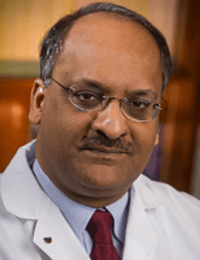 Dr. Agarwal is Executive Vice Dean for the UAB Heersink School of Medicine and the holder of the Hilda B. Anderson Endowed Chair in Nephrology in the Department of Medicine at the University of Alabama at Birmingham (UAB). He served as Director for the Division of Nephrology from Jan 1, 2008 through Sept 30, 2021. He served as President of the American Society of Nephrology in 2020.  He has served as Interim Chairman, Department of Medicine at UAB from August 2011-August 2012 and as Interim Senior Vice President and Dean in 2013 for the UAB School of Medicine. His principal interests in clinical nephrology include acute kidney injury, specifically in the intensive care unit setting, toxic nephropathies, fluid and electrolyte disorders and diabetic kidney disease. His research efforts include three main areas. (i) His laboratory is studying the molecular regulation of the human heme oxygenase-1 (HO-1) gene in renal and vascular injury. Induction of this gene occurs as an adaptive and beneficial response to injury and is protective in several diseases including acute renal failure, transplant rejection and atherosclerosis. Studies are focused on identifying regulatory regions in the human HO-1 gene that mediate induction in response to stimuli such as heme, cytokines, nitric oxide, modified lipids and growth factors in renal and vascular injury. The studies involve molecular biology techniques to study DNA-protein interactions using chromatin structure analysis, 3C and chromatin immunoprecipitation assays. (ii) The functional significance of HO-1 gene expression is also being evaluated using both in vitro and in vivo systems in transgenic animal models of acute renal injury, transplantation, angiogenesis and atherosclerosis. His laboratory is also studying the anti-inflammatory nature of HO-1 in mediating immune responses. (iii) His laboratory is actively pursuing gene and cell therapy approaches in the kidney and the vasculature in animal models of transplantation using recombinant adeno-associated viral vectors.