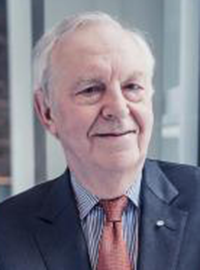 Born in Winnipeg, Dr. Dirks received his MD from the University of Manitoba (1957) and a Fellowship in Medicine from the Royal College of Physicians (1963). He trained in nephrology research at the NIH (1963-1965) with Dr. Robert Berliner and held a Medical Research Council of Canada grant from 1965 to 1987 for his work in renal pathophysiology. Now Emeritus Professor of Medicine at the University of Toronto, Dr. Dirks held a number of major academic positions, including Director of Nephrology,  McGill University (1965-1976); Head, Department of Medicine, University of British Columbia (1976-1987); Dean of Medicine, University of Toronto (1987-1991); and Dean-Rector, Aga Khan University in Pakistan (1994-1996). From 1994 to 2005, Dr. Dirks chaired the International Society of Nephrology’s Commission for the Global Advancement of Nephrology, a major educational-clinical outreach program in over 100 countries. Dr. Dirks is Emeritus President and Scientific Director of the Gairdner Foundation, having held the role of President from 1993 until his retirement in 2016; in 2011, the Foundation created the John Dirks Canada Gairdner Global Health Award in his honor. Among other recognition, Dr. Dirks is a recipient of the International Distinguished Medal from the US National Kidney Foundation (2005), the International Society of Nephrology’s Roscoe R. Robinson Award (2004), the Order of Canada (2006), and honorary doctorates in science from the University of Manitoba and the University of Toronto. He is an elected member of the American Society for Clinical Investigation (1971), the Association of American Physicians (1977), and the American Academy of Arts and Sciences (2008). In 2012 he was inducted into the Canadian Medical Hall of Fame and received the Queen Elizabeth II Diamond Jubilee Medal.