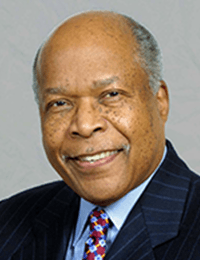 Louis W. Sullivan, MD, is a hematologist, health care advocate, and policy leader. Among his many achievements, he was founding dean and president of Morehouse School of Medicine and served as US Secretary of Health and Human Services (HHS). Dr. Sullivan was the first Black physician-scientist elected to the ASCI, in 1972.

Born in Atlanta in 1933, Dr. Sullivan spent his early childhood in rural Georgia before graduating from Booker T. Washington High School in Atlanta. He received his undergraduate degree from Morehouse College and medical degree in 1958 from Boston University School of Medicine, where he was the only Black student in his class. Dr. Sullivan completed an internship and residency in hematology at New York Hospital–Cornell Medical Center. He began his teaching career at Harvard Medical School and founded the Boston University Hematology Service in 1967.

In 1975, Dr. Sullivan became the first dean and director of medicine at Morehouse, serving as founding president when the school of medicine became independent. Appointed HHS Secretary by President George H.W. Bush in 1989, Dr. Sullivan established the Office of Minority Programs, which led to the formation of the National Institute on Minority Health and Disparities (NIMHD), and initiated the NIH Women’s Health Research program. He oversaw the appointment of NIH’s first woman director, Dr. Bernadine Healy, as well as the first woman and Hispanic surgeon general, Dr. Antonia Novello. Dr. Sullivan returned to Morehouse in 1993 and became emeritus president in 2002.

Dr. Sullivan continued to champion health advocacy both in the United States and abroad, co-founding Medical Education for South African Blacks and the Association of Minority Health Professions Schools. He served as co-chair of the President’s Commission on HIV and AIDS (2001–2006) and as chair of the President’s Commission on Historically Black Colleges and Universities (2002–2009). The Sullivan Alliance to Transform the Health Professions was established in 2005 to increase representation of members of minoritized ethnic and racial populations across health care and academic medicine; the Alliance was merged into the Association of American Medical Colleges in 2022.

Dr. Sullivan was elected to the Institute of Medicine (now the National Academy of Medicine) in 1975 and the American Academy of Arts and Sciences in 1994. He is recipient of the 2008 Jimmy and Rosalynn Carter Award for Humanitarian Contributions to the Health of Humankind.