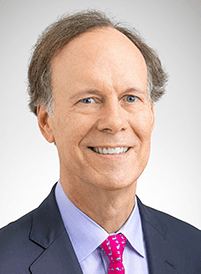 William Kaelin obtained undergraduate and MD degrees from Duke University and completed his internal medicine training at the Johns Hopkins Hospital, where he served as a house officer and chief medical resident. He was a medical oncology clinical fellow at the Dana-Farber Cancer Institute and a postdoctoral fellow in the laboratory of David Livingston, during which time, as a McDonnell Scholar, he began his studies of tumor suppressor proteins. He is currently a Howard Hughes Medical Institute Investigator, the Sidney Farber Professor of Medicine in the Department of Medicine at the Dana-Farber Cancer Institute, a professor at Harvard Medical School, and a professor and senior physician-scientist at Brigham and Women's Hospital. Dr. Kaelin is a member of the American Society for Clinical Investigation (elected 1997), the American College of Physicians, the National Academy of Sciences, and the National Academy of Medicine. He has served on the NCI Board of Scientific Advisors, the AACR Board of Trustees, and the IOM National Cancer Policy Board.

Dr. Kaelin is recipient of numerous awards: the 2019 Nobel Prize in Physiology or Medicine, shared with Sir Peter J. Ratcliffe and Dr. Gregg L. Semenza for their discoveries of how cells sense and adapt to oxygen availability; the MSKCC Paul Marks Prize for Cancer Research; the AACR Richard and Hinda Rosenthal Prize; a Doris Duke Distinguished Clinical Scientist Award; the Canada Gairdner International Award; the ASCI Stanley J. Korsmeyer Award; the Scientific Grand Prix of the Foundation Lefoulon-Delalande of the Institut de France; the Albert Lasker Award for Basic Medical Research; the Helis Award; and the Massry Prize.